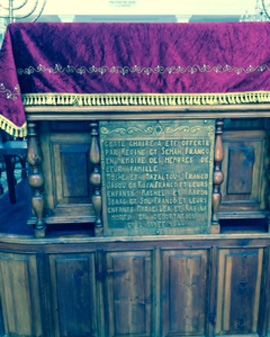 I have just spent a few days on the idyllic Greek island of Rhodes. We ate well, enjoyed the tourist shops and explored some fascinating ancient and medieval sites. But the heart of the visit was the short time we spent inside the oldest Synagogue in Greece, now the only one remaining on Rhodes. The day we are there, July 22nd, it is – unusually – bursting with vibrant international life.

Seventy years ago, it was a different story.

In 1943 Rhodes, formerly ruled by the Italians, was taken over by the Germans. On July 23rd of the following year, even as the tide of World War 2 was turning against the Nazis, 1,673 members of the Jewish community were rounded up and shipped off on a long and arduous journey to Auschwitz, where most of them were killed on arrival. Forty two Jews who were able to claim Turkish nationality were saved from deportation, thanks to the actions of the Turkish Consul General, Selattin Ulkumen, and one hundred and fifty one survived Auschwitz. Today there are just a handful of Jews living on the island but, for the 70th anniversary commemoration of the deportation, descendants of those who once contributed so much to the island culture and history have reassembled from Canada, South America, the USA, Africa and Europe and we, with no connections to Rhodes beyond friends whose family was once a pillar of the community, find ourselves among them in the boiling sunshine as they search for homes where their grandparents or great grandparents once lived and flourished.

For the Jewish community of Rhodes has a rich history dating back to the second century and, at its height in the 1930’s, had a population of almost 4,000 people and six synagogues. Many were Sephardic Jews who fled Spain at the time of the Inquisition in the late 15th century and spoke to Ladino, a particular variant on Spanish and a language now in danger of dying out. Although there were periods when they were not welcome, generally Jews on the island lived in harmony with their rulers. It is good to be reminded not only of this rich heritage but the important contribution Jews made to the island culture.