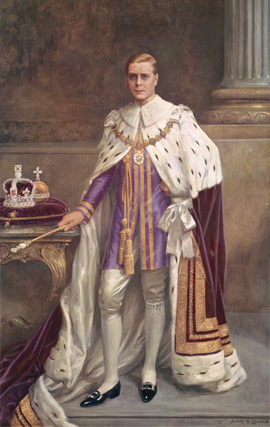 I went to Spitalfields last week to see a lost edition of The Illustrated London News prepared for the May, 1937 Coronation of Edward Vlll which never happened.  After Edward abdicated, 75 years ago this month, intent on marrying the twice-divorced Wallis Simpson, the blue leatherette souvenir magazine, price 5 shillings, with paintings of the uncrowned king in his coronation robes, was shelved. When Edward’s brother took his place as George V1 a new edition was quickly prepared with the faces painted over – presumably by the obliging royal painter, Albert Collings, who may only have had one brief sitting with Edward. New photographs were inserted and new stories written. Only the date stayed the same. The owners of The Illustrated London News, the world’s first illustrated weekly magazine, kept the printer’s proof well hidden for fear of embarrassing the new King and his wife, Queen Elizabeth, since the magazine’s success depended on smooth relations and good access to the royal family. The magazine closed down in 2003, but a few months ago staff at the new ILN,  https://www.iln.co.uk/ now a digital media and publishing company, found the one remaining issue in a box while transporting the archive. The future of the surviving copy is uncertain – perhaps it will be sold to a museum. But in the meantime I found the most chilling part of the magazine was the artist’s impression of an event that never happened.  Archbishop Cosmo Gordon Lang dreaded the moment when he would have to place a crown on the head of a man who he did not believe took his religious duties seriously enough to be King of England. In the event he never had to do this. But there, in the pages of the magazine that was never published, you can see a painting of the Archbishop, poised with the magnificent crown in the air, waiting to place it on the head of the man who in the end became Duke of Windsor, and by May 1937 was effectively an exiled ex-monarch. It was a close call but here is the anticipated moment frozen in time.

Giving a talk about That Woman – what else? -the other night I was thrown an interesting question from a well-known journalist in the audience.

Did I think – he asked – that I would have made the risky journey to the Mexican desert to interview a man I had never met had I not been a journalist at heart? Journalists go for people and human interest stories whereas academic historians rely on sober printed sources and would never expect an encounter with a stranger in such a bizarre and beautiful location to yield useful documents or to provide reliable information. On balance, I think he is right. It was both my journalist’s instinct and the fact that he gave me almost no time to dither or deliberate, that decided me to go.  The man – a champion free diver who ran a diving camp on the edge of  the magnificently beautiful  Sea of Cortes, offered me a window of opportunity when he could see me and after that – well, he said,  he couldn’t promise anything. At least I would see some amazing sea lions, he promised.
So what was to lose? My life perhaps! It didn’t feel too risky at the time but, in addition to the machete my new friend took with us on the journey (to kill snakes he insisted) and the lack of phone signal for several days in the desert , Mexican Swine ‘ flu took hold while I was there resulting in hundreds of deaths and I was seriously at risk. Airport officials almost refused me entry back into London. But I didn’t know any of that when I decided to fly out and meet him, any more than I knew that the journey would result, albeit indirectly, in my finding a new archive about Wallis Simpson and the Abdication – a find of serious historical significance that truly changes perspective of the Abdication crisis.

So, at a time when being a journalist carries a whiff of deepest unpleasantness,  I was pleased this week to own up to being one. Luckily I consider myself a historian as well and think both disciplines combine rather well.