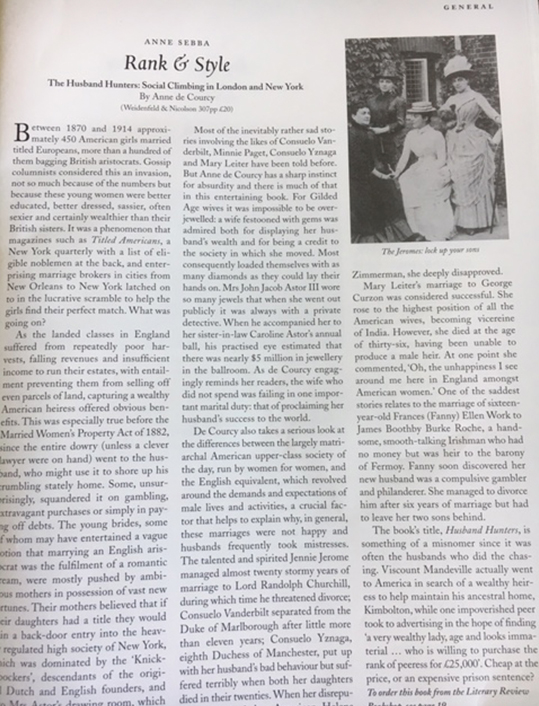 Between 1870 and 1914 approximately 450 American girls married titled Europeans, more than a hundred of them bagging British aristocrats. Gossip columnists considered this as an invasion not so much because of the numbers but because these young women were better educated, better dressed, sassier, often sexier and certainly wealthier than their British sisters. It was a phenomenon which magazines such as Titled Americans, a New York quarterly, with a list of eligible single noblemen at the back, and enterprising marriage brokers in cities including New Orleans as well as New York, latched on to in the lucrative scramble to help the girls find their perfect match.

What was going on?

As the landed classes in England suffered from repeatedly poor harvests, falling revenues and insufficient income to run their estates, with entailment preventing them from selling off even parcels of land, capturing a wealthy American heiress offered obvious benefits. This was especially true before the Married Women’s Property Act of 1882 since the dowry (bar one or two exceptions if a clever lawyer was on hand) went entirely to the husband who might then use it to shore up his crumbling stately home. But some squandered it on gambling, extravagant purchases or simply in paying off debts.

On the other side the young brides, some of whom may have entertained a vague notion that marrying an English aristocrat was the fulfilment of a romantic dream, were mostly pushed by ambitious mothers in possession of vast new fortunes who believed that if their daughters had a title they would have a back door entry into the highly regulated New York society of the ‘Knickerbockers’, descendants of the original Dutch and English founders, and Mrs Astor’s drawing room, which famously fitted only 400.

Most of the inevitably rather sad stories concerning women such as Consuelo Vanderbilt, Minnie Paget, Consuelo Yzanaga and Mary Leiter – have been told before. But Anne de Courcy has a sharp instinct for absurdity and there is much of that in this entertaining book. For gilded age wives it was impossible to be over jewelled; a wife festooned with gems was

admired both as displaying her husband’s wealth and being a credit to the society in which she moved so that most loaded themselves with as many diamonds as they could lay their hands on. Mrs John Jacob Astor lll wore so many jewels that when she went out publicly it was always with a detective. When he accompanied her to her sister-in-law, Caroline Astor’s annual ball his practised eye estimated that that there was nearly $5 million in jewellery in the ballroom. As de Courcy engagingly reminds her readers, the wife who did not spend was failing in one important marital duty: that of proclaiming her husband’s success to the world.

But there is also a serious look at differences between the largely matriarchal American upper class society of the day, run by women for women, compared with the English equivalent, which revolved around the demands and expectations of male lives and activities, a crucial factor which helps explain why overall the marriages were not happy; the men continued to take mistresses. The talented and spirited Jennie Jerome, who became the mother of Winston, managed almost twenty stormy years married to Lord Randolph Churchill during which time he threatened divorce, Consuelo Vanderbilt separated from the Duke of Marlborough after little more than eleven years while Consuelo Yzanaga, 8th Duchess of Manchester, put up with her husband’s bad behaviour but suffered when both her beautiful daughters died in their twenties. Bizarrely, when her disreputable son also married an American, Helena Zimmermann, she deeply disapproved.

Mary Leiter’s marriage to George Curzon was considered successful as she rose to the highest position of all American wives becoming Vicereine of India although she died, aged 36, unable to produce a male heir. She commented, “Oh, the unhappiness I see around me here in England amongst American women.”

One of the saddest stories of all relates to the marriage of 16 year old Frances (Fanny) Ellen Work to the Hon. James Boothby Burke Roche, a smooth talking, handsome Irishman who had no money but was heir to the barony of Fermoy. Fanny soon discovered her new husband was a compulsive gambler and philanderer and, after just 6 years, managed to divorce him but had to leave her two sons behind. One of them was to become the maternal grandfather of Princess Diana.

The book is entitled Husband Hunters, something of a misnomer since it was often the husbands who did the chasing. Viscount Mandeville actually went to America in search of a wealthy heiress to help maintain his ancestral home, Kimbolton, while some impoverished Peers took to advertising in the hope of finding ‘a very wealthy lady, age and looks immaterial … who is willing to purchase the rank of peeress for £25,000.’ Cheap at the price or an expensive prison sentence?

Anne Sebba is the author of Les Parisiennes: How the Women of Paris Lived, Loved and Died in the 1940’s and Jennie Churchill; Winston’s American Mother.