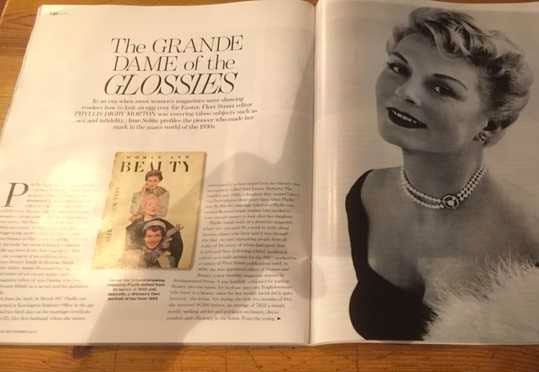 A shorter version of this article appeared online.

Phyllis Digby Morton was a pioneer – a ground-breaking female journalist in an era when Fleet Street was dominated by men. Appointed as editor of a new women’s magazine in 1930 when she was only 29, she launched an innovative advice column dealing with such taboo subjects as sex and infidelity. She became one the best-known fashion and beauty writers of the day – and her marriage to the society couturier Henry Digby Morton (known as Digby) confirmed her celebrity status. Yet today her name is largely forgotten.

Phyllis was born in the first year of the 20th century, the youngest of six children, to a middle-class literary family in Brixton, south London. Her father, James Harwood Panting, was a successful writer of adventure stories and children’s magazine editor (it was Panting who first published Treasure Island, as a serial) and her godfather was HG Wells. A free spirit from the start, in March 1917 Phyllis ran away to get married at Kensington Registry Office at the age of 16 (she falsified her birthdate on the marriage certificate, claiming she was 21). Her first husband, whom she seems subsequently to have wiped from her history, was an engineer called Noel Ernest Herberte, and the couple’s only child, a daughter they named Valery, was born almost three years later, when Phyllis was 19. But the marriage failed and Phyllis was soon a divorced, single mother who needed to earn enough money to look after her daughter.

Phyllis found work on a detective magazine, where she was paid £6 a week to write about famous crimes (she later said it was through this that she met so many interesting people from all walks of life, many of whom had spent time in jail) and then (following a brief – accidental – career as a radio actress for the BBC) worked for a variety of Fleet Street publications until in 1930, aged 29, she was appointed editor of Woman and Beauty, a new monthly magazine started by Amalgamated Press. “I was fearfully criticised for putting Beauty into the name, for in those days any English woman who went to a beauty salon for her weekly facial did it quite furtively,” she wrote. Yet during the first five months of 1935 she received 38,260 letters, an average of 7,652 a month, mostly seeking advice and guidance on beauty, dress, comfort and efficiency in the home. Even the young Princess Elizabeth recognised her influence – meeting Phyllis on the Woman and Beauty stand at the 1948 Ideal Home exhibition and commenting: “I think this magazine is a great help to women.”

Phyllis sent a personal reply to each letter. She wrote a column under the pen name ‘Ann Seymour,’ and was also responsible for commissioning short stories and pages of advice, some from doctors, about issues of the day that were not being openly discussed elsewhere: wartime love affairs, grief, anger and loneliness.

In 1942 she devoted several editions of the magazine to discussions of infidelity and adultery. In one article, entitled “Can a man love two women at once?”, the (male) writer comforted women by telling them that a man does not actually love two women at the same time. He might fall in love with another woman but “he’s got to fall out of love with you first”. In other words, if you forgive him a dalliance, everything will be all right in the end…

Other wartime pieces addressed anxiety as to whether women could have a baby after 40 and gave advice to ‘young, healthy, vital, happily married wives’ on how to sublimate their sex drive while separated from their husbands. The female author of this piece concluded: “The fact is that the sex impulse is largely bound up with artistic creation,” and advised women to keep busy with some sort of artistic activity to take their minds off sex.

Phyllis was one of two women editors (the other was Audrey Withers of Vogue) invited during the war to join a special committee at the Ministry of information, set up to investigate the social and psychological problems facing women’s forces. She was also on the advisory committee set up by Minister of Labour Ernest Bevin to discuss the need to recruit women into the workforce.

By this time Phyllis had married again, her second husband being the Irish-born couturier Henry Digby Morton, five years her junior and founder of the Lachasse fashion house. HG Wells gave her away at their wedding in 1936. They lived in a penthouse in Mayfair and became one of London’s most photographed couples, with magazine features celebrating their glamorous style.

In 1940 she and Digby were on a trade mission to America, sailing on the SS City of Benares, when they were torpedoed by a German U Boat 600 miles from land. The Benares was carrying 90 evacuee children, in some cases entire families on their way to safety in North America, most of whom were lost. Phyllis later described how she spent 20 hours in a lifeboat waiting to be picked up. “I learned during those interminable 20 hours that those who seem too delicate and highly strung to stand any fierce ordeal are the ones who face up magnificently to danger and endure silently.”

Only 13 of the 26 who started in the lifeboat survived. Phyllis spent the night trying to comfort 14-year-old Pat, ‘who had swum to [my] boat when her own overturned and who didn’t know what had become of her mother and sister …to keep Fred, the ship’s carpenter, awake because he’d had no sleep for two nights and the cold of the sea is like snow, once you fall asleep it is fatal… Perhaps when the war is over I may be able to tell the full story of the sinking of the city of Benares,” she wrote in her Woman and Beauty column in 1942.

In February 1944, as the war still raged, Lord Rothermere, owner of the Daily Mail, personally offered Phyllis the hugely prestigious job of Assistant Editor at the newspaper, the first time a woman had been offered the post and one she would have relished. But, according to Phyllis, the appointment was vetoed by the then editor Bob Prew, who told her he that he would take freelance pieces from her but did not want her in the office as his second-in-command.

She wrote in her diary that night: “Proof conclusive – Fleet Street is a man’s world. How long, oh Lord!”

Phyllis continued at the helm of Woman and Beauty until 1950, and the magazine folded shortly after she left. She then became Beauty Editor of Woman’s Own and set up the innovative Beauty Club of Great Britain, a non-profit-making organisation providing talks, discounts for subscribers and a newsletter. She insisted that “some of the happiest moments of my life have been when in the course of my job I’ve helped a women to make the very best of herself… turning ugly ducklings into swans.”

Through the Beauty Club she hoped to empower women by discussing subjects that were often considered taboo elsewhere, such as sex, acne or plastic surgery. In 1957 she wrote: “Facial ugliness, even if superficial, imposes a serious handicap which frequently destroys happiness and endangers chances of economic survival. Yet in nearly all cases even the gravest of these defects can be eliminated or greatly reduced by skilful plastic surgery…”

A common thread in the hundreds of articles she wrote throughout her life was the idea that cultivation of personal attractiveness was a worthwhile goal for all women, however clever. As she frequently reminded readers, a successful businessman had once said to her: “There is no place in my office for the girl who isn’t intelligent enough to know how much appearance counts.”

She also believed that making the best of yourself was not only a personal morale booster but was important to please ‘him’. “Give yourself the looks he likes,” she wrote, or “Six simple steps to the look he’ll love” – deeply unfashionable views today.

Her remarkable combination of talent, style and energy won her many admirers. “[Phyllis] is pretty as a picture and powerful as a rocket launcher, and anything she touches begins to hum and buzz and send out sparks within half an hour,” wrote fellow journalist Amanda Marshall in the 1950s.

Felicity Green, herself a grande dame of Fleet Street and now in her 90s, started her own career working for Phyllis as a teenager, having left school early and written a letter begging her to take her on. “Woman and Beauty was a rule-breaking, pocket-sized pre-1960s magazine that was way ahead of the game,” she has said. “When other magazines were teaching readers how to knit an egg cosy for Easter, Woman and Beauty wrote about virginity, frigidity, infidelity – and style. Woman and Beauty changed my life – as did Phyllis.”

Phyllis was also the author of two books, including one of advice for teenagers, published in 1947 and said to be the first in the UK aimed at girls of 17-19. But although the publishers claimed on the jacket that “no one in England today could be better qualified to influence the teenage girl in her tastes and approach to life,” there was no mention of the author’s obvious qualifications: that she herself had been a teenage bride and a teenage mother. According to her granddaughter Suki, an artist, Phyllis’s daughter Valery had been sent abroad to a convent in Belgium to be educated, returning only in the holidays. Phyllis never talked about Valery in the office but kept a photo of her in a drawer. The fact of her motherhood was simply not a subject for discussion. Yet as adults the two women, close enough in age to be sisters, became very close. Later, when she became a grandmother, “she was more like a kind and generous fairy godmother,” explained Suki. “I always called her Phyllis.”

She and Digby Morton made a good team. He loved cooking and interior design; she was the one with the business brain, who organised their busy social lives, bolstered his career by ensuring he received publicity, and drove the car. Yet, unlike him, she does not even have a mention in the Dictionary of National Biography.

It’s hard to see Phyllis Digby Morton as a woman who lacked courage, yet she came to believe that she should have fought to take up that job at the Daily Mail. “Many’s the time I’ve regretted my lack of confidence, because now I shall never know what might have been,” she said in an interview many years later.

And she never did write in any more detail about her 1940 ordeal in the Benares lifeboat. She had walked off the boat looking amazingly elegant, but the trauma of seeing so many die was a real-life drama she did not want to relive.

In the 1960s Phyllis and Digby Morton moved to the Cayman Islands. Phyllis was writing almost until the end, her fertile imagination unstoppable, and there is a sheet in her archives from her final years headed ‘ideas for stories’. But she missed the buzz of life in a city and of having a constant supply of books to read. Her daughter Valery died suddenly and unexpectedly in 1978, Digby in 1983 and Phyllis, heartbroken, a few months later in 1984. Her granddaughter Suki brought her ashes back to England to be buried and has lovingly preserved her cuttings, photos and letters. They reflect a woman way ahead of her time, one who should be celebrated for her courage, vision, pioneering spirit and her deep desire to help other women achieve their full potential too.

Anne Sebba is the author of Les Parisiennes, How the Women of Paris Lived Loved and Died in the 1940s (Orion Paperback £9.99)